We lost Andrew Prowse in December 2018… and I still don’t have coherent words… so please allow me to ramble a bit with a few random thoughts and memories.

If you’re a Farscape fan, you probably know the names Brian Henson, Rockne S. O’Bannon, and David Kemper… the creative triad behind the series. But you may not be familiar with how huge a part of the series Andrew was as well. He directed sixteen and a half episodes, including the first (“Premiere”) and the last (“Bad Timing”), but he was deeply involved with production and post-production on the entire series… guiding, supervising, contributing ideas, and generally acting as “Quality Control” throughout.

Here’s just one example of an Andrew contribution: In 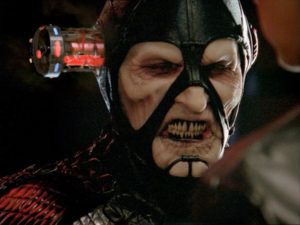 the season two Farscape episode “Mind the Baby,” which I wrote and Andrew directed, there’s one of those dreaded “as you know” scenes between Scorpius and Braca where they explain, more for the audience than for each other, a bunch of Plot Stuff.

Andrew thought, quite rightly, that it was a rather boring, static, talky scene… so he and the Creature Shop whipped up a little visual to give the scene a bit of a kick: the “cooling rod” unscrewing from Scorpius’s head. Wasn’t scripted, wasn’t something any of us had even talked about. David and I saw it, to our massive surprise, for the first time in “dailies” after Andrew had gone ahead and shot it.

We loved it, of course,  and the “cooling rod” soon became a fundamental part of the Scorpius mythology, so interwoven with the rest of our episodes that it seems as if it had been planned from the start… but nope, it was just a Way Cool Thing that Andrew had thrown in for the fun of it.

Andrew was a big, gruff, kindhearted, acerbic, hugely talented man. He could be stubborn verging on pigheaded at times, but it was always because he cared about the work. He had a booming voice and a wicked, dry sense of humor. He was an Aussie through and through, fiercely defending his homeland whenever we unwashed Yanks would attempt to cast aspersions thereon.

He and I once got into a passionate argument over the pronunciation of the word “sauce.” I made the simple statement of fact that every Aussie pronounces it as “source” rather than “sauce.” Andrew thought that was utterly ridiculous and attempted to demonstrate the audible difference between “source” and “sauce” thusly: “They sound nothing alike! One is ‘source’ and the other is ‘source’!” He would not be deterred from that conviction — even when I later discovered that a Sydney restaurant was selling its own homemade brand of catsup with the label “Tomato Source” and I delightely informed Andrew that even his countrymen had abandoned him on the issue.

Andrew loved the Australian rock band Mental as Anything (yes, we titled a Farscape ep in their honor); his opinion of my musical tastes rose several points when I took to them as well during my Sydney stay and purchased their entire discography. (How can you not love a band that does a song about “Dorothy Parker’s Hair”?) As I write this, I’m listening to one of Andrew’s favorite Mentals songs, “If You Leave Me Can I Come Too?” and reflecting how he left us far too soon.

C'mon, say something, you know you want to Cancel reply