Froonium is a term that Hans Beimler and I made up as a technobabble placeholder while working on Star Trek: The Next Generation. “So, Picard gets trapped in a cave, and can’t beam back to the ship…” “Why can’t he? We’ve beamed people out of caves before.” “Uh,  because this is a special cave; there’s, um,  froonium in the rocks, which blocks the transporter beam.”

The word itself never made it into a Next Gen ep, but has made appearances in both TekWar and Farscape, and has been officially recognized as an (imaginary) element as shown here: 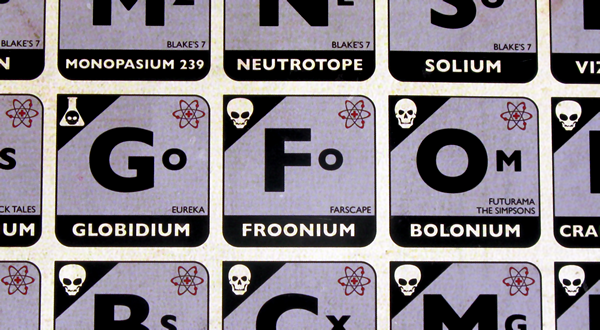 Detail from Russell Walks’s awesome The Periodic Table of Imaginary Elements poster—“122 fictional elements, organized by media and genre”—which can be purchased at Russell Walks’s website.

(‘Tis quite an honor for froonium to be up there in the company of cavorite, kryptonite, and dilithium…)

1 thought on “What is Froonium?”

C'mon, say something, you know you want to Cancel reply